Abu Hamid al-Ghazali (1058-1111 A.D.) was not only one of the great Islamic philosophers, he is also considered to be, after the Prophet Muhammad, the foremost authority on Islamic theology and jurisprudence. What most people don’t know, however, is that al-Ghazali wrote extensively on the topic of happiness.  Indeed, his monumental Revival of the Religious Sciences, which runs over 6000 pages and 4 volumes, was reprised as a shorter text in Persian, labeled the Alchemy of Happiness.  In this we see some of his core ideas: that happiness consists in the transformation of the self, and that this transformation consists in the realization that one is primarily a spiritual being.  The ultimate ecstasy, al-Ghazali contends, is not found in any physical thing, but rather lies in discovering through personal experience one’s identity with the Ultimate Reality.

One of al-Ghazali’s nicknames is “The Proof of Islam,” and he is called that not only because of the sagacity of his writings, but because of the quality of the life he lived. He was appointed Professor of Theology at the University of Baghdad at the tender age of thirty-three. But for the next five years he was gripped in a spiritual crisis, trying to find a rational foundation for Islam’s basic principles as outlined in the Qu’ran. He finally concluded that there was no rational way to refute skeptical doubt, but that there was another way to discover truth, one hinted at by the prophet Muhammad and the sages within the Sufi tradition, the mystical side of Islam. This way was that of immediate experience, an inward discovery that depends not on logic but on intuition and imagination. The prophets of all times are the ones who have experienced this reality based on transforming themselves away from a self-centered to a God-centered existence.

Armed with this new insight, al-Ghazali left Baghdad and all of his material possessions (except some books which were later stolen by thieves, a sign that he had to also leave those behind), as well as his cozy position at the University. He went to Syria to live with Sufi monks and to adopt a lifestyle that was solely based on discovering the real truth about the self and one’s relation to God. Then he went on the pilgrimage to Mecca, where he became convinced that he had been appointed to be the next great reformer of the faith. His task was to transform Islam, away from the mere adherence to rules, to the inward mystery of a live encounter with God. This would prove the key secret to happiness, one that would satisfy the very purpose for which Man is created.

The Alchemy of Happiness

In the Alchemy of Happiness, al-Ghazali begins by writing that “He who knows himself is truly happy.” Self-knowledge consists in realizing that we have a heart or spirit which is absolutely perfect, but which has been covered with dust by the accumulation of passions derived from the body and its animal nature. The essence of oneself is likened to a perfect mirror which if polished would reveal one’s true divine nature. The key to this polishing is the elimination of selfish desires and the adoption of a contrary desire to do what is right in all aspects of one’s life. As he writes, “the aim of moral discipline is to purify the heart from the rust of passion and resentment till, like a clear mirror, it reflects the light of God.”

Such a task is not easy, thus it would seem that genuine happiness is not a state most people can attain. Indeed, al-Ghazali emphasizes that only a few people have attained this supreme happiness, which is the ecstasy of union with the divine. These people are the prophets, which appear in all times and places, as messengers to remind mankind of their true purpose and their ultimate goal. The prophets are those who have succeeded in cleansing their inner mirrors of all the rust and dirt accumulated by bodily desires and comparisons with others. As a result, they can see in their waking moments what other people only see haphazardly in their dreams, and they receive an insight into the nature of things through an immediate flash of intuition rather than through laborious learning.

The most striking claim that al-Ghazali makes about the prophets is that they are the happiest people, for they have achieved the ultimate goal of human existence. Al-Ghazali writes that every person is born with a “knowing pain in the soul” resulting from a disconnection from the Ultimate Reality. The tragic condition of Man is that our eyes have been so distracted by physical things and pleasure, that we have lost the ability to see the unseen. This is why people are so unhappy: they are trying to relieve this pain in the soul by recourse to physical pleasure. But physical pleasure cannot relieve a pain that is essentially spiritual. The only answer to our condition is a pleasure which comes not from the body but from self-knowledge.

This self-knowledge is not to be attained by mere thinking or philosophy, however. Indeed, as a practicing member of Sufism, al-Ghazali refers to two ways of achieving the ultimate state of happiness: through dance (the whirling dervishes) and music (Qawalli, as represented in modern times by the songs of Nusrat Fateh Ali Khan, for example). One of the basic dances of the Sufi dervish consists in simply spinning around a large nail placed between the first two toes of the left foot. This symbolizes the idea that everything revolves around God, that He is the center as well as the circumference of every activity. As one spins, the boundaries of the self begin to fade away, and one becomes completely absorbed in pure love. Euphoria is achieved when we lose consciousness of the self and become focused on something we are completely and ultimately related to. In this way, the Sufi dance or music is similar to Csikszentmihalyi’s concept of “Flow,” except on a higher level– the level of absorption not to a mere task, but to that task which is a metaphor for one’s commitment to Ultimate Reality.

In the process of arguing for this conclusion, al-Ghazali makes many other interesting observations about the nature of happiness. He points out that there are different faculties within the soul, and that a corresponding happiness is connected with each faculty. Each part of the soul delights in that for which it has been created. But the highest function of the soul is the perception of truth; hence it is the greatest happiness one can obtain. Al-Ghazali uses an analogy to describe this; one would be much happier to meet the King of a country than its Prime Minister. Similarly, one should be much happier to discover the Ultimate Reality than some conditional lesser truth.

In a similar vein, al-Ghazali writes that unhappiness is created by enslavement to desire and the belief that one should satisfy only one’s own desires (as governed by base instincts and appetites). He maintains that everyone perceives, even in that bewildering state, that something is amiss, that we are living an inauthentic life that needs correction. This nagging feeling is the source of our greatest joy, for once we become conscious of it we can be led in the opposite direction, towards the life of meaning and self-transcendence.

Al-Ghazali loved to tell the following parable as one that illustrates the secret to genuine happiness. Bayazid was a famous “drunken Sufi” who was accosted by an unhappy man who claimed that he had fasted and prayed for years but had found no joy. Bayazid told him that even with three-hundred years of ascetic devotion he would still find no happiness. “Why?” the man asked. “Because your selfishness stands between you and God,” Bayazid replied. The man pleaded to be taught the way to overcome his selfishness. Bayazid answered that if he were to shave his beard, wear a loincloth, put on a feeding bag full of walnuts, and stand in the marketplace shouting “A walnut for everyone who slaps me,” then he would be truly happy. Of course, the man went away disappointed, for he was unable to carry out this suggestion. But Bayazid knew there was no other way. We cannot imagine how to be happy, but such wild imagination is the secret to happiness.

Al-Ghazali teaches us the following about achieving true happiness:

The Alchemy of Happiness

Enroll in Our FREE Mini-Course! 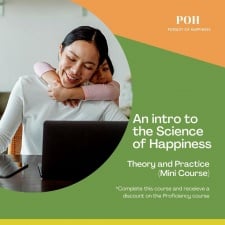