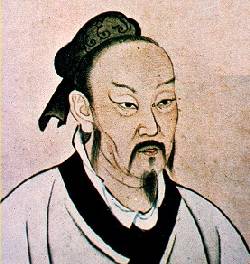 When they (the sprouts of virtue) are rejoiced in, they will grow. Once they begin growing, how can they be stopped? As they cannot be stopped, unconsciously one’s feet begin to dance and one’s hands begin to move.” Mencius, who flourished during the Chinese Warring States period about 2,300 years ago, could well be called the pioneer of Positive Psychology. He lays unprecedented emphasis on human nature and the role of the mind in the quest for happiness.

The Book of Mencius provides us with full-length debates on the topic, in which he tries to convince the jaded and skeptical kings of neighboring states that deep within us lie what he calls the “sprouts of virtue.” He uses a wide range of colorful stories and “thought experiments” to illustrate this. Among the most celebrated of these are the story of the “child by the well”, where he argues that the most callous human would feel alarm and pity seeing a child teetering over a precipice, and the tale of “King Hui and the ox”, in which the king cannot bear the plaintive cries of an ox being taken to sacrifice. According to Mencius, if people nourish these “sprouts” of identification and sympathy, and extend such feelings to broader social and political relationships, they are filled with a growing sense of irrepressible and intoxicating joy (“the feet begin to dance and the hands begin to move”).

This linkage between virtue and happiness provides a thought-provoking contrast with the categorical imperative of Kant, who insisted that we try to do good only for its own sake, without consideration for personal benefit, spiritual or otherwise. According to Mencius, the more joy we find in the process, the more motivated we are, and the more we grow as a result. “If we do not experience satisfaction, they (the sprouts) will shrivel up.” Mencius was convinced that the mind played a mediating role between the “lesser self” (the physiological self) and the “greater self” (the moral self) and that getting the priorities right between these two would lead to sagehood and personal fulfillment.

The reason why we have picked Mencius out as a major figure in the history of happiness is not because of the volume of work he has written on the topic. It is because he spells out the role that feelings of happiness or satisfaction play in motivating people to do the right thing, as well as the sense of joy that results from the practice of humanity (ren).

Mencius was born in the Warring States Period (roughly 4th Century BCE), a little less than two hundred years after Confucius, during the same era as the Daoist philosopher Zhuangzi and the Greek philosopher Plato. Like Confucius, he was born in the area of modern Shandong Province, was a teacher by profession, and traveled extensively to provide philosophical and political counsel to various rulers during a very tense period.

He was famous for arguing that, deep down, we are endowed with the “sprouts” of humanity and righteousness, and we simply need to steadily cultivate those sprouts to become virtuous people. If political leaders would only focus on setting themselves straight before setting their nations straight (i.e., rule through the power of moral example, instead of trying to force their ideas and policies on people), world peace would be easier to achieve.

Self-Realization and the Role of Satisfaction

A number of passages in the Mencius (the title of the oldest classic recording the teachings of Mencius) point to the role of satisfaction and joy on the path to self-realization. Let’s take a look at these passages and how they are linked:

Asked to explain his strengths, Mencius answers that he is good at “nourishing his ‘flood-like qi (vital energy).’ Mencius admits that this “qi” is very hard to describe:

“This qi is extremely big and extremely powerful. Nourish it with righteousness and protect it from harm, and it will fill Heaven and earth. It grows through the accumulation of righteousness and cannot be obtained by contrived actions. If one’s actions are not satisfying to one’s mind then it shrivels up.”

The earliest mention of qi as a philosophical concept can be found in the Book of Changes, one of the oldest books in existence. It is a key concept in Chinese medicine as well as in Mencius’ idea of fulfillment and happiness. Mencius makes it clear that this vital force is nourished through the steady accumulation of righteous acts. He compares the person who tries to nourish this vital force through contrived, calculating acts to a farmer who tries to speed up the growth of his corn by forcefully pulling it up.

In the above passage Mencius suggests that vital force has another source of nourishment: the feeling of satisfaction one obtains from moral actions.

In the opening passage of the Analects, Confucius essentially says the same thing: “Isn’t it a joy to study and regularly practice?” Confucius is not talking about intellectual knowledge, but about practical wisdom, and like Mencius, he underlines the sense of joy that accompanies personal growth. Yet Mencius goes one step further, implying that this feeling of satisfaction is needed for self-cultivation. Without this sense of fulfillment, the vital force remains undernourished and weakened.

A Source of Great Joy

In a rather more mysterious passage, Mencius talks about a powerful sense of fulfillment that springs from self reflection and the practice of humanity.

“The myriad things are complete in us. There is no greater joy than to reflect on ourselves and become sincere. There is nothing closer to humanity than to vigorously practice shu (consideration for others).”

Humans are deeply linked with the rest of the universe because Tian, the supreme power, has endowed them with a Tian like nature, or perhaps one can say, a piece of itself. When we reflect and act on our essential nature, which contains the sprouts of virtue, our sincerity grows. We discover that deep down, we are capable of performing acts of humanity and righteousness for their own sake. It is this sincerity that is the source of our greatest joy. So the practice of self-reflection, which is highly valued by Confucius, is the foundation of Mencius’ concept of self-cultivation. Once again early Greek philosophy comes to mind, and specifically Socrates’ statement that “the unexamined life is not worth living.”

Happiness and the Dual Structure of the Self

This begs the question: if all people share benevolent tendencies that simply need to be properly cultivated for the realization of virtue, then why is happiness so difficult to achieve? Mencius’ concepts of the “lesser self” and the “greater self” provide some major clues:

Student: “Though they are equally human why are some people great and other people small-minded?”

Student: “Though they are equally human why do some people follow their greater self and others follow their lesser self?”

Mencius: “The senses of hearing and sight are unable to think and are thus obscured by (material) things. When one thing acts on another thing (ie things acting upon the senses), they can be led astray. It is the function of the mind to think. If it thinks it will find the answer, but if it doesn’t think, it won’t. This is what Tian has given us. If one first establishes the greater self then one’s lesser self cannot snatch it away. This is what makes a great person.”

Mencius believes that all people have a lesser and greater self and that the mind plays a mediating role between these two aspects of the self. The lesser self seems close to the physiological side of human nature as it is attracted to material things such as food and sex. Mencius is certainly not saying that the lesser self is necessarily bad or that the greater self is good, but rather that stunted personal growth and unhappiness is a result of an imbalance in the relationship between the two.

Mencius also seems to be saying that as the greater self grows and becomes more firmly established, it becomes less and less prone to domination by the lesser self. The mind plays a critical role in this relationship. Mencius strongly suggests that it is the function of the mind to reflect on one’s priorities and ensure that the sensual aspect of the lesser self is not carried away by the magnetism of material things.

In another celebrated passage, Mencius argues that the mind derives pleasure from “principle and righteousness” in the same way that we derive pleasure from satisfying our physical inclinations.

In conclusion, human nature consists of both sensual and moral drives that seek nutrition for physical and moral growth. As such, ethical relationships are much more than moral duties because they express natural tendencies. Just as we find physical satisfaction in nourishing our “lesser selves,” we find a deeper satisfaction in nourishing our “greater selves” through the practice of sincerity and the realization of virtue.

Mencius offers a vision of irrepressible happiness that results from the balanced practice of the great virtues:

According to Mencius, music enables people to express joy in acquiring the great virtues. This sense of joy catalyzes the growth of the virtues, and the resulting chain reaction leads to an ecstatic experience.

Mencius’ optimistic view of human nature is a powerful challenge to the idea that humans need laws and rules to leash and restrain a naturally wicked predisposition. Instead, He offers the idea of ‘moral sprouts’ that require virtuous action and self-reflection as sources of nourishment.Because they are the result of natural inclinations (he loves to use agricultural language to emphasize how natural the process is), the great virtues of humanity and propriety lead to a state of joy and personal fulfillment that is much more effective in promoting social harmony than teachings that are simply forced on people.

A major implication of Mencian psychology is that education through indoctrination, without moral example and personal reflection, is ineffective. The reason is that humans have the power to make moral choices; and it is only through the cultivation of that power that genuine humanity and happiness can be realized.