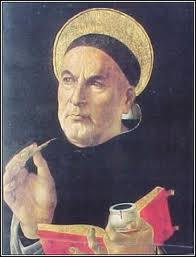 Thomas Aquinas (1224-1274) is one of the towering figures in Western philosophy and theology, so great that he is even called the “angelic Doctor” by the Roman Catholic Church.  Within a twenty year span he wrote over forty books, including his masterpiece The Summa Theologica, in which he constructs a vast system integrating Greek philosophy with the Christian faith.   In the second part of this great work, as well as Book 3 of his shorter volume Summa contra Gentiles, he sets out a systematic answer to the question of what human happiness is, and whether it can be obtained in this life.   His ultimate answer is that perfect happiness (beatitudo) is not possible on earth, but an imperfect happiness (felicitas) is.   This puts Aquinas midway between those like Aristotle, who believed complete happiness was possible in this lifetime, and another Christian thinker, St. Augustine, who taught that happiness was impossible and that our main pleasure consists merely in the anticipation of the heavenly afterlife.

Thomas Aquinas was born in the castle of Roccasecca, north of Naples, to a wealthy aristocratic family. After studying at the University of Naples, however, he renounced his noble heritage, made a vow of celibacy, and determined to become a monk. He entered the Dominican order and studied with Albertus Magnus (also known as Albert the Great), who had initiated the great project of integrating all knowledge with Christianity. This meant not being afraid of empirical science or the contributions of the great Arabic philosophers, who had already synthesized the philosophy of Plato and Aristotle with their Muslim faith. Aquinas was so stout in stature, and so silent in class, that he was called “The Dumb Ox” by his fellow students. Albert however, responded: “You call him a Dumb Ox, but I tell you this Dumb Ox shall bellow so loud his bellowing will fill the world.”

Aquinas was ultimately assigned as a lecturer to various Dominican houses in Italy, but his real task was the masterpiece, his Summa Theologica, “The Summation of All Theology,” which sets out an entire book dedicated to the question of happiness. For twenty years Aquinas worked on this project, but on a night in December 1273 after celebrating Mass he experienced a mystical vision that shattered his entire aspirations. After that night he never wrote another word, and he died six months later. On his deathbed he is reported to have pointed to all of his books and said “After what I have experienced, all that is just straw.” As we shall see, this is most ironic when considering Aquinas’ views on happiness, since in the Summa one of his main conclusions is that true happiness consists in a mystical (beatific) vision of God that is only possible in the afterlife.

The Doctrine of Double Happiness

Already in his Summa Contra Gentiles, Aquinas had taken a position similar to St. Augustine’s, that perfect happiness is not possible in this lifetime. Aquinas takes seriously St. Paul’s assurance in 1 Corinthians 13:12 that “for now we see as through a glass darkly, but then we see face to face.” This world is too plagued with unsatisfied desires to achieve that ultimate good which we all seek by nature. Furthermore, God has basically created us with a desire to come to perfect knowledge of Him, but this is hidden from us while in our mortal bodies. True knowledge of God would require being able to see him directly, but this is only possible by a completely purified soul. When this occurs, we will experience the ultimate pleasure—a pure and everlasting bliss that will be the satisfaction of every human desire and the obliteration of every sadness or worry.

However, unlike St. Augustine, Aquinas goes on to maintain that we can achieve a kind of “imperfect happiness” here on earth. In this he is undoubtedly influenced by Aristotle, who argued that happiness depends on the actualization of one’s natural faculties. The highest faculty the human being possesses is Reason, from which it follows that we can achieve happiness in this life in proportion to the level of truth accessible to Reason. As he writes:

Man’s ultimate happiness consists in the contemplation of truth, for this operation is specific to man and is shared with no other animals. Also it is not directed to any other end since the contemplation of truth is sought for its own sake. In addition, in this operation man is united to higher beings (substances) since this is the only human operation that is carried out both by God and by the separate substances (angels). (Summa Contra Gentiles, book 3, chapter 37)

While the perfect realization of Truth will only occur in heaven where we will perceive God “face to face,” there is an imperfect counterpart of that vision here on earth. Thus Aquinas is lead to make a distinction between “perfect happiness” which he calls beatitudo, and “imperfect happiness” called felicitas. By making this distinction, Aquinas is able to tone down the pessimistic view of human nature expressed by St. Augustine, including the doctrine of Original Sin. As Aquinas writes, “Human Nature is not so completely corrupted by sin as to be totally lacking in natural goodness.” We have an impulse in us that seeks God and other impulses that pull us down to worldly pleasures. However, it is possible to begin the process of healing in this lifetime by exercising the natural virtues that Aristotle talks about—the virtues of wisdom, courage, moderation, justice, friendship, etc. Furthermore, God in his grace has now revealed to us three additional virtues: those of faith, love and hope. These will pull us through to the final end so long as we begin the effort.

Happiness as Knowledge of God

Aquinas is uncompromising in his view that our true happiness can only be found in knowledge of God. No other worldly good or pleasure can truly provide us with the ultimate good we seek. As he argues in the Summa Theologica:

It is impossible for any created good to constitute man’s happiness. For happiness is that perfect good which entirely satisfies one’s desire; otherwise it would not be the ultimate end, if something yet remained to be desired. Now the object of the will, i.e., of man’s desire, is what is universally good; just as the object of the intellect is what is universally true. Hence it is evident that nothing can satisfy man’s will, except what is universally good. This is to be found, not in any creature, but in God alone, because every creature has only participated goodness. Therefore, God alone can satisfy the will of man, according to the words of the Psalms (102:5): “Who alone satisfies your desire with good things.” Therefore, God alone constitutes man’s happiness.” (Summa Theologica Part 2. Q.1. Article 8)

This passage illustrates well Aquinas’ unique blend of rigorous logical reasoning with his use of Scripture which reveals to us the same truth through other means, in this case the mouth of the prophet. Nothing can contradict the Truth: hence if Reason and Revelation are valid pathways to truth, they must ultimately be reconcilable. So Reason confirms to us what we already know deep down in our hearts: that our ultimate desire lies in absolute perfection, which can only be found in God, the absolute Being.

Thus for Aquinas we must make a sharp distinction between enjoyment and happiness. Enjoyment pertains to worldly goods and physical pleasures: but these tend to be very short-lived. And even if all of our worldly desires were satisfied—even if we were to experience every possible enjoyment—we would remain unhappy, since we would still have a nagging feeling that something is missing. Today Aquinas would point to the experience of many rich people and celebrities as evidence for this truth. Despite having every worldly good—fine foods, cars, houses, vacations, friends, family—many of them remain deeply unhappy, even spiraling into the misery of drugs and suicide. Aquinas would explain this as follows: when every enjoyment is felt, the soul begins to crave for something more than mere enjoyment. But if one has no knowledge of this “something more” or doesn’t know how to go about finding it, the enjoyment turns to pain and suffering. This also explains why we see a lot of billionaires suddenly change towards the middle or end of their lives: that nagging feeling that there is something more results in charitable work or an orientation to a higher purpose in life.

One might, however, question Aquinas’ insistence that perfect happiness is only possible in the afterlife. Is it possible to purify the soul in this lifetime, so that one can possess a direct experience of Ultimate Reality? The Buddhists and Hindus certainly think so: they can point to certain individuals such as the Buddha who have obtained absolute enlightenment. And there is a mystical side to monotheistic religions like Christianity, Islam, and Judaism as well, according to which the ultimate goal is Oneness with God, which has been attained by various saints or prophets throughout history. Aquinas’ own mystical experience at the end of his life might be just such an example: perhaps he actually achieved a beatific vision of God, a vision so strong that it rendered all of his words obsolete.